Not Just The Kavanaugh Scare: Dozens Of Attacks On Pro-Lifers Nation-Wide An armed would-be assassin’s alleged attempt on the life of Supreme Court Justice Brett Kavanaugh last week is part of a wave of violence, arson, vandalism, and intimidation targeting pro-life groups and government officials since the leak last month of a draft Supreme Court opinion that would overturn Roe v. Wade.

There have been more than three dozen such incidents directed at crisis pregnancy centers and churches in at least 20 states and Washington, D.C., according to a tally maintained by LifeNews.com, an anti-abortion site.

A loosely organized group known as Jane’s Revenge claimed responsibility for several of the attacks, including the apparent arson in Wisconsin and Buffalo. The group, which sometimes attaches the Antifa “A” symbol to its pronouncements, has called for a “night of rage” over the pending Supreme Court decision, on a website called The Anarchist Library.

Above, graffiti threat at Wisconsin Family Action. Below, is the attackers’ “call to action.”

Another group, “Ruth Sent Us” – its name evoking the late liberal Justice Ruth Bader Ginsburg – has published the home addresses of conservative Supreme Court justices on Twitter. While not claiming responsibility for the disturbed gunman arrested near Kavanaugh’s house, it informed followers where his children and the children of Justice Amy Coney Barrett attend school. 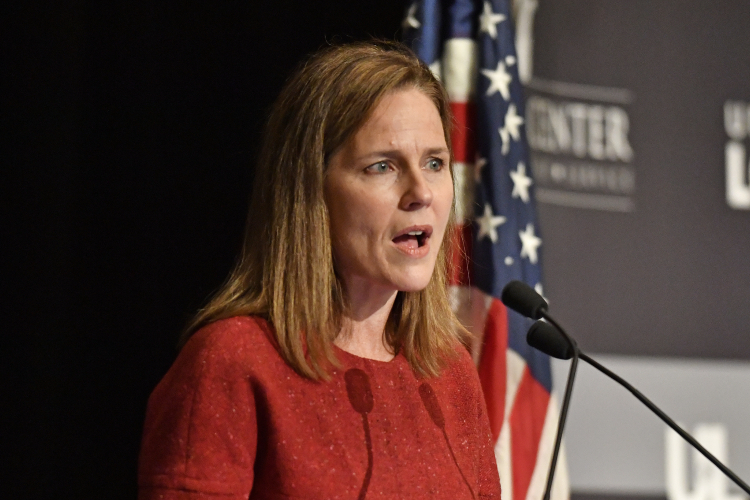 Federal law expressly prohibits “pickets or parades … in or near a building or residence occupied or used by” any judge, and the House passed a bill this week to expand Supreme Court Police protection to justices’ families.

The rash of incidents and intimidating behavior is domestic terrorism, said Jim Harden, executive director of CompassCare, a nonprofit that operates the Buffalo pregnancy clinic, and two others in upstate New York. Harden and his family relocated Sunday after social media accounts began seeking his home address.

“This is new,” he said. “It was the leak that really sparked this kind of activity.”

CompassCare also described the campaign against it as “abortion terrorism” – expressing heightened fears in a place where a white supremacist terrorist had murdered 10 people just weeks before. FBI agents visited the Buffalo clinic in response to the firebombing, but the organization has heard nothing since from federal authorities. Harden expressed skepticism that they – in contrast with local police – have taken the incident seriously.

In response to the May 2 leak of the draft opinion overturning Roe, which in 1973 legalized abortion nationally, New York Gov. Kathy Hochul earmarked $35 million in protection funds – but it was to safeguard abortion clinics, which have not been targets of attacks lately.

The Justice Department did not respond to questions about whether it has classified the multiple incidents as domestic terrorism or assigned a team to an investigation. “Jane’s Revenge” has claimed responsibility for the arson and vandalism attack on the Madison office of the Wisconsin Family Action center. Madison police also did not respond to multiple requests for comment. 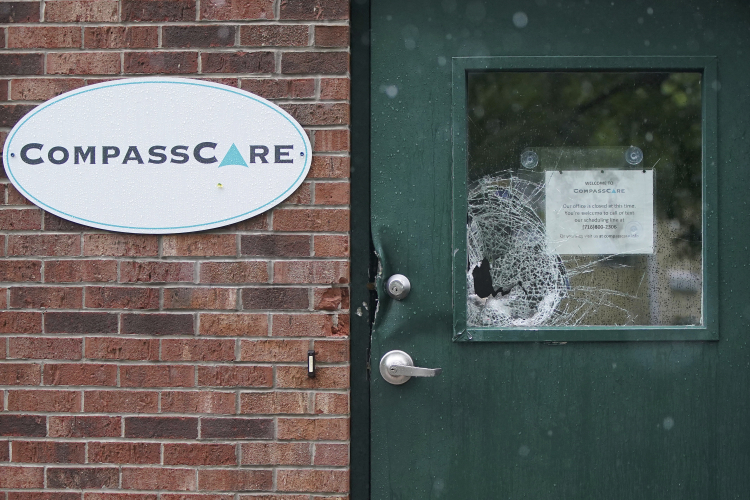 There have been no arrests made in connection with any of the incidents, which began after Politico published the leaked draft opinion by conservative Justice Samuel Alito declaring that “Roe was egregiously wrong from the start.”

Harden compared the law enforcement response to the CompassCare attacks to the silence surrounding the person who may have leaked the draft opinion.

“There doesn’t appear to be anything going on in either case,” Harden said.

Chief Justice John Roberts said he had ordered an internal investigation that might identify the leaker, who presumably comes from a very small circle of people who would have had access to draft opinions.

Agreeing with Harden was Rebecca Anderson of “40 Days for Life,” an anti-abortion group headquartered in Texas that has worked with an organization also targeted by Jane’s Revenge vandals: a Lynnwood, Washington, crisis pregnancy center called NextStep.

“I don’t think these acts of violence are being taken seriously as elected officials aren’t publicly condemning them,” she said. “The lack of response from the Justice Department leads one to believe that they pick and choose what qualifies as domestic terrorism based on politics. Our concern is that this will embolden abortion supporters to commit more violence against those who support life.”

In contrast, several anti-abortion figures stated that local police have been exemplary in their response and attitude.

“The police came immediately, and the DC Metro Police have been outstanding,” said Janet Durig, executive director of the Capital Pregnancy Center, which saw its front door splashed with red paint and the threatening graffiti tag left by Jane’s Revenge vandals, “If abortion isn’t safe then you aren’t either.”

“The local authorities are taking this very seriously and are investigating,” Harden said. “We had cameras trained at all the points of entry so there is videotape evidence.” Still, there has been no indication that local authorities have made any progress in their investigations.

The available evidence may be thin. Cameras did capture the vandals at NextStep in Lynnwood, Washington, but the assailant was bundled up like an Antifa extremist and nearly impossible to identify, according to NextStep Executive Director Heather Vasquez. “You could tell it was a woman,” she said.

The attacks on pro-life centers don’t square with an emphasis in major news outlets on the potential for attacks on abortion providers, which do not appear to have proliferated in the past several weeks.

Reports about the spate of incidents involving anti-abortion centers by both CNN and the Washington Post have stressed that violence occurs on “both sides” of the abortion debate.

Planned Parenthood said late Tuesday that “we condemn violence and hatred in all forms” in a statement to RCI that emphasized “acts of violence, vandalism, and intimidation from anti-abortion activists and politicians” aimed at the organization’s “health center staff and patients.”

The pro-choice National Abortion Federation claimed in a 2020 report that abortion providers receive hundreds of death threats and thousands of “hate emails” and harassing phone calls each year. There has been one deadly incident at an abortion clinic since 2010 – the 2015 attack on a Planned Parenthood facility in Colorado Springs that left three dead.

The anti-abortion movement does not have an equivalent database regarding threats received by pregnancy centers and religious organizations. In 2012, a left-wing activist entered the Family Research Council’s Washington, D.C. headquarters and shot and wounded a security guard.

While violence and intimidation have long characterized the abortion debate, Jane’s Revenge has promised to escalate the conflict. In its self-titled “First Communique” published after the Wisconsin attack, it declared:

We have run thin on patience and mercy for those who seek to strip us of what little autonomy we have left. As you continue to bomb clinics and assassinate doctors with impunity, so too shall we adopt increasingly extreme tactics to maintain freedom over our own bodies. We are forced to adopt the minimum military requirement for a political struggle. Again, this was only a warning. Next time the infrastructure of the enslavers will not survive. Medical imperialism will not face a passive enemy. Wisconsin is the first flashpoint, but we are all over the US, and we will issue no further warnings.

Once again we find ourselves confronted with an obvious but ignored dilemma for which there really IS an answer — an accurate and legal response. But, once again, the authorities who are running our nation have walked away from the Rule of Law, their oaths to “protect and defend” the Constitution, and are hiding their complicity in lawlessness at every level: federal, state, and local.

The most insidious part of this abandonment of law enforcement to enforce laws is that a massive majority of Americans do NOT support it! How could these sycophants, knowing most Americans disagree, continue their march toward totalitarianism and while doing so, claim their cause is democracy? Democracy is the exact opposite of what they espouse and support!

Are we Americans too dumb to see and recognize these brazen purposes? “What purposes?” An absence of accountability for purposeful wrongdoing always ushers in an environment of tyranny. We’ve seen it across the globe throughout world history. And today is NO different.

Could the goal of the Left actually be to install a lawless civic structure in which no one is held accountable for rule-breaking? I highly doubt it. So what could the endgame be?

A clean slate with a  revised government held in a stranglehold by hand-picked lefties who call all the shots, pick all the winners and losers and determine who is worthy to number among them and who is not.

“If” Democrat Party leaders had any other ambition, why would they have not stopped this insanity? One would think they would know for certain to expect a shellacking in the midterms and even in 2024 going forward, they needed to come back toward the political middle during election seasons. They’re definitely NOT doing so. Do they not understand their plight of slaughter in the midterms?

Maybe they don’t care about the outcome of the midterms.

That makes no sense, right?

But what if the 2022 midterms already have the election vote counting setup to function just as it did in 2020?

“Real” vote results would not matter to the results — once again!