To best understand what’s being discussed in today’s story below, it’s critical for you to read Part One of the story published yesterday.

The facts in Parts One and Two are monstrous for our nation and the world. It’s sad to know that men — many elected but many more appointed to various positions — have ignored the rights of individuals to seek private healthcare experts and jointly foisted COVID-19 treatment on us all.

What Else Have They Been Wrong About?

Not even a month has passed since we witnessed the stunning revelation that Pfizer never tested its COVID shots for transmissibility before proclaiming publicly that the vaccine protected against transmission. Then they had the CDC put the bioweapon on the childhood vaccine schedule and increased the price of their jab by 400% the same day.

As reported by Rising host Robby Soave (video above) and Vanity Fair,9 a report by the Minority Oversight Staff of the Senate Committee on Health, Education, Labor, and Pensions, released in October 2022, concluded that “a research-related incident is the most likely explanation for COVID-19.”

The COVID jab tyrants were also wrong when they insisted that mandating an experimental gene therapy was within legal bounds. Such mandates have since been overturned in a number of districts. Most recently, a New York judge ruled that New York City’s COVID jab mandate for municipal workers was enacted illegally, and any employee fired for noncompliance must be immediately reinstated — and receive back pay.10

According to Supreme Court Justice Ralph Porzio, the Health Commission’s jab mandate “violates the separation of powers doctrine” enshrined in the state constitution, as well as workers’ due process rights. In his ruling, Porzio noted:

The New York City law department immediately filed an appeal, which blocked the reinstatement of the workers. Time will tell, but I suspect that in the end, the city will just end up having to pay out even more in back pay.

As mentioned earlier, amnesty for COVID dictators is impossible in light of continued censorship, and there’s no sign of that ending any time soon. On the contrary, leaked documents show the Department of Homeland Security (DHS) has every intention of policing wrong-think.

Biden’s “Ministry of Truth” may have been disbanded in the wake of public mockery, but the plan for such an entity was not shelved. As reported by The Intercept:11

“Years of internal DHS memos, emails, and documents — obtained via leaks and an ongoing lawsuit, as well as public documents — illustrate an expansive effort by the agency to influence tech platforms …

Behind closed doors and through pressure on private platforms, the U.S. government has used its power to try to shape online discourse.

According to meeting minutes and other records appended to a lawsuit filed by Missouri Attorney General Eric Schmitt, a Republican who is also running for Senate, discussions have ranged from the scale and scope of government intervention in online discourse to the mechanics of streamlining takedown requests for false or intentionally misleading information …

In a March meeting, Laura Dehmlow, an FBI official, warned that the threat of subversive information on social media could undermine support for the U.S. government …

There is also a formalized process for government officials to directly flag content on Facebook or Instagram and request that it be throttled or suppressed through a special Facebook portal that requires a government or law enforcement email to use. At the time of writing, the ‘content request system’ at facebook.com/xtakedowns/login is still live …

According to a draft copy of DHS’s Quadrennial Homeland Security Review, DHS’s capstone report outlining the department’s strategy and priorities in the coming years, the department plans to target ‘inaccurate information’ on a wide range of topics, including ‘the origins of the COVID-19 pandemic and the efficacy of COVID-19 vaccines, racial justice, U.S. withdrawal from Afghanistan, and the nature of U.S. support to Ukraine.’”

As you can see, censorship is not restricted to COVID issues alone. They include a variety of national politics and geopolitical issues as well. In other words, Americans’ views of the world and our country are being shaped by a propaganda arm of the U.S. government itself — not another country — and the reason they have no qualms about doing this is because Obama legalized the use of government propaganda against Americans during his presidency.

Censorship Is Now a Core Duty of the DHS

In addition to abolishing or radically reforming medical boards, the FDA and CDC, we probably need to do the same to the DHS. As reported by The Intercept, documentation shows the “DHS views the issue of tackling disinformation and misinformation as a growing portion of its core duties.”

When I think about what Homeland Security should be doing, policing and punishing my personal views about health, medicine, climate change, political actors, and geopolitical actions are not at the top of the list. Yet that’s precisely what they’re doing and will be doing more of in the years to come.

I don’t know about you, but when I think about what Homeland Security should be doing, policing and punishing my personal views about health, medicine, climate change, political actors, and geopolitical actions is not at the top of the list. Yet that’s precisely what they’re doing and will be doing more of in the years to come.

To control the information space, the DHS intends to “leverage advanced data analytics technology” and work with nongovernmental agencies and other civil society organizations “to build resilience to the impacts of false information.”

For now, Schmitt is combating this tyrannical and unconstitutional overreach in court. As reported by The Intercept:12

“In May, Missouri Attorney General Eric Schmitt took the lead in filing a lawsuit to combat what he views as sweeping efforts by the Biden administration to pressure social media companies to moderate certain forms of content appearing on their platforms.

The suit alleges governmentwide efforts to censor certain stories, especially ones related to the pandemic. It also names multiple agencies across the government that have participated in efforts to monitor speech and ‘open collusion’ between the administration and social media companies …

On October 21, the judge presiding over the case granted the attorneys general permission to depose Fauci, CISA officials, and communication specialists from the White House.

While the lawsuit has a definite partisan slant, pointing the finger at the Biden administration for allegedly seeking to control private speech, many of the subpoenas request information that spans into the Trump era and provides a window into the absurdity of the ongoing effort.

‘There is growing evidence that the legislative and executive branch officials are using social media companies to engage in censorship by surrogate,’ said Jonathan Turley, a professor of law at George Washington University, who has written about the lawsuit.

‘It is axiomatic that the government cannot do indirectly what it is prohibited from doing directly. If government officials are directing or facilitating such censorship, it raises serious First Amendment questions.’”

No Chance of Amnesty for US Leadership

To bring us back to where we started, with Oster’s plea for amnesty for those who ignorantly chose to be on the wrong side of history, I am not alone in my view that her proposition is an unworkable one.

Sure, on a personal level, many are likely willing and able to bury the hatchet and join hands again with friends and family who shunned and berated them as “conspiracy theorists” and “anti-science anti-vaxxers” (although following the science and the data was precisely what we were all doing).

A court recently ruled Alex Jones must pay nearly $1 billion in damages to families for falsely claiming that no children died in the 2012 Sandy Hook shooting,13 an event that many in alt media suspected was a false flag operation at the time. Now, that fine is quite a precedent.

What would be an appropriate payout by federal agencies that falsified data to hide adverse effects and deaths? If you guessed in the trillions, you would have profoundly underestimated the damage they have done.

No Chance of Amnesty for Enforcers of False COVID Narrative

The American Conservative had this to say about the “Soviet blue-check media” in the United States:14

“There can be no amnesty for the unthinking enforcers of the narrative of the regime. I don’t know how to put this gently to my fellow members of the blue-check media class, so I will say it bluntly. You guys resemble nothing so much as the info apparatus of some failing ideological state — late-Soviet apparatchiks, only without the erudition that was demanded of regime intellectuals in Moscow back in the day …

In February 2020, the Washington Post published a news story with the headline: ‘Tom Cotton Keeps Repeating a Coronavirus Conspiracy Theory That Scientists Have Debunked.’

More than a year later … the paper ‘rewrote the article’s headline, softening ‘conspiracy theory’ to ‘fringe theory’ and noting that scientists have ‘disputed’ it rather than ‘debunked’ it.’ How generous. How scrupulous …

Suppose the lab-leak theory was a rare instance in which blue-check media abdicated basic journalistic responsibility in favor of elite narrative enforcement. In that case, one could forgive and forget, as the Atlantic now demands.

But such lapses are utterly commonplace — systemic, you might say. Remember when Big Tech, Big Media, and Big Intelligence teamed up to frame the New York Post’s Hunter Biden reporting in October 2020 as ‘misinformation’ — only to concede, once the election was safely over, that it was, in fact, entirely accurate?

Remember the absolute unanimity with which blue-check media defended the efficacy of COVID vaccines in stopping transmission — before begrudgingly admitting that, erm, actually, they really don’t work as advertised?

Remember when blue-check media were dead-certain that Jussie Smollett was the victim of a racist attack? And on and on and on. Once the falsity of the old narrative is definitively established, most blue-checks shamelessly move on to the next elite narrative in need of media reinforcement — no apology, no introspection.

The few willing to acknowledge their errors, meanwhile, insist they were merely following the ‘expert’ consensus at the time. This is risible. The job of the reporter isn’t to parrot what the experts say at any given moment: it is to question what anyone in power claims.

‘If your mother tells you she loves you, check it out,’ used to be the journalistic motto. Dr. Anthony Fauci, Pfizer, WHO, and 50 former intelligence officials deserve far more exacting scrutiny than Mom.”

Another rebuttal to Oster’s call for amnesty that I want to highlight is from the anonymous Substack writer known only as “A Midwestern Doctor,” who dissects the “manipulative language” used by Oster in her article. The anonymous doctor writes:15

“When I read through this article, I realize the author highlighted a very common problem … The author is demanding to receive forgiveness for their conduct but … is refusing to admit they did anything wrong.

In order to accomplish this, they utilized a variety of manipulative rhetorical constructs that are relatively simple and frequently utilized. Because it is so common to encounter propaganda pieces like this, I thought there might be some value in illustrating my thought process as I read this article.”

The doctor goes on to share screenshots of Oster’s article, with arrows to sentences and thoughts inserted in red. Below are a few of those screenshots. For the rest, please see the original Substack article.16 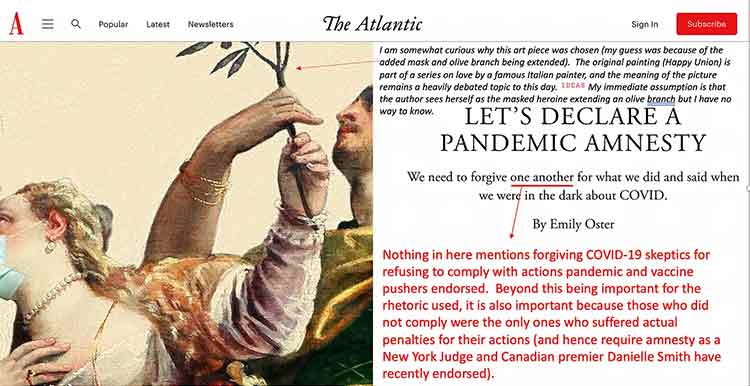 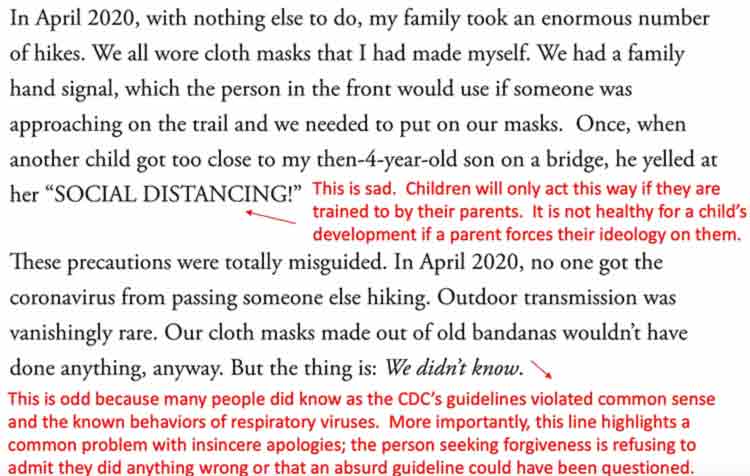 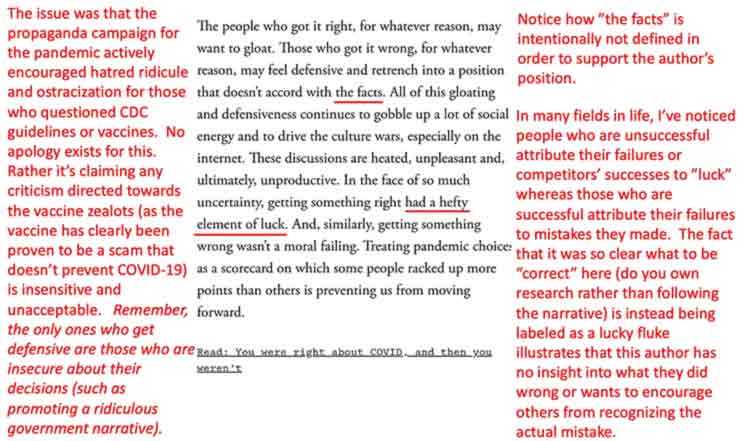 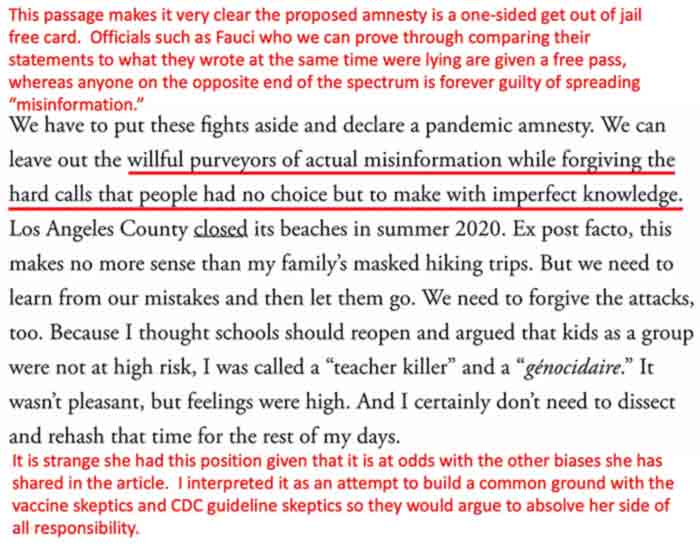