May 31 is fast approaching. What’s the significance of that day? Supposedly, that’s the day President Biden will eliminate Title 42, and our world will immediately change! How so? Title 42 gave U.S. immigration officials a mandate to immediately return to their country of origin immediately after entering the U.S. illegally. Why? Because of the unknown status of all these illegals regarding possible COVID-19 infection and even other diseases.

Though we still have seen more than one million illegals cross our border during the last year, one can imagine what it WOULD have been without Title 42. And with that order’s cancellation on May 31, look out! Predictions are that twice the number of illegals who have come into the U.S. in the last year will find there were here after the cancellation.

This process begs the question: What will happen to all the illegals that are already here before the cancellation of Title 42?

Don’t worry: the U.S. government always has a plan to accommodate wrongdoers that fit our leftist folks here: let’s legalize them all!

President Joe Biden’s border chief, Alejandro Mayorkas, is planning a no-deportation amnesty for many of the 1.7 million illegal migrants waiting in the courtroom backlogs, even as officials are preparing to welcome many hundreds of thousands more job-seeking migrants.

“This is the equivalent of nullifying our immigration laws,” said Rob Law at the Center for Immigration Studies, who is a former appointee at the Department of Homeland Security (DHS). The backlog amnesty will be quickly used as an excuse by officials to justify the award of work permits and green cards to the illegal migrants, he said:

This is how this will be teed up. They’ll say, “As you know, these people were being subjected to these draconian [deportation] rules of the past that don’t reflect our current equity and compassion … but now it’s not right for them to not have the opportunity to have a livelihood.” That’s what the messaging will be for next giving them mass parole or some [status] that allows a work permit … They’re laundering illegal migration behavior through a multi-staged approach.

The backlog amnesty is being marketed as a cost-saving measure for the government’s prosecutors and judges before the planned inflow of myriad more economic migrants once the Title 42 barrier is removed in late May.

But the government’s cost-saving will impose huge pocketbook costs on the millions of Americans who are struggling to earn decent wages or paying their inflating rents in an economy flooded with illegal migrants. Those pocketbook problems are undermining Democrats’ chances in the 2022 election, according to a survey of loyal Democrats reported on April 4 by Politico:

A woman from the Boston area who went first mentioned rising gas and food prices, food shortages at her local Whole Foods, and the increasing cost of housing. “It just seems like everything is going up and there’s no end in sight,” she said.

In the other focus group, a Black man from the Houston area talked about trying to subsist on the $12- and $13-per-hour jobs he was being offered. “No one can live off of that, especially with inflation,” he said.

The Hill reported on April 5:

Morgan Jackson, a leading Democratic strategist based in North Carolina, a swing state, said he expects Republicans to come at Democratic candidates hard on border- and immigration-related issues. “Obviously Republicans are going to try to make immigration a top issue. They have tried to do that for the last 10 years, almost every election,” he said.

He said voters are more concerned about “pocketbook issues” such as the strength of the economy, inflation, rising gas prices and the cost of health care.

Migration advocates are cheering the proposed amnesty, which is being pushed by Alejandro Mayorkas.

“There are 1.6 million cases in immigration court,” said a tweet from Aaron Reichlin-Melnick, an advocate at the American Immigration Council. “If we want to clear backlogs, absent Congress, using prosecutorial discretion to dismiss many of these cases is the only way forward.”

BREAKING @ICEgov chief lawyer issues new memo on enforcement priorities. This is a good government effort that clarifies how prosecutorial discretion will be exercised by ICE attorneys nationwide.https://t.co/gW2g9hiBiX pic.twitter.com/hvjldHcgm0

During the eight years of the Obama administration, officials dropped roughly 160,000 immigration cases in the courtroom backlog, such as deportation cases.

The Mayorkas backlog amnesty is getting low-key treatment from the establishment media. For example, the DHS reporter at the New York Times declined to quote any opponents of the amnesty plan in her report:

It is the latest in a series of efforts by the Biden administration to streamline immigration enforcement in the absence of action from Congress.

An ICE official, authorized by the agency to speak publicly without being identified, said lawyers would review each case before the court to see if it met the administration’s priorities for enforcement: cases that involve a public safety or national security threat, as well as those involving people who recently crossed the border without documentation.

“Our immigration enforcement efforts are focused on those who pose a threat to public safety, the security of our borders and our national security,” Alejandro N. Mayorkas, the homeland security secretary, said in a statement on Monday. “The memo issued today further empowers our enforcement attorneys to focus on these priorities, and it will help clear a longstanding case backlog that has clogged the immigration court system and stood in the way of swiftly removing the greatest threats.”

The article notes, “The American Immigration Lawyers Association estimates that there are at least 700,000 such cases — about 40 percent of the court backlog.” 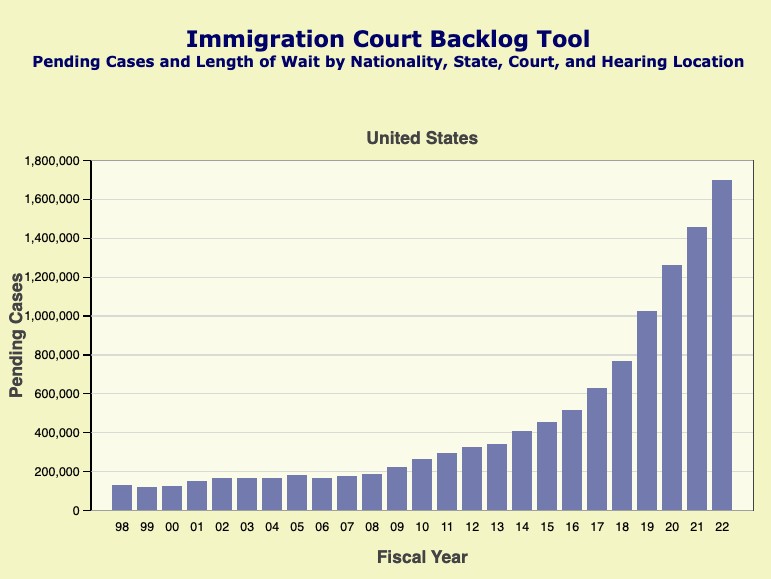 The federal government deliberately created the massive backlog in immigration cases, partly because it allowed the cartels’ conveyor belt of smuggled labor and returned debt payments to generate more profits from migrant labor sent to the U.S. labor market.

This means that when you are allowed into the country to await an immigration judge looking at your case, there will be anywhere from four to six years before your case is considered. While you’re in the United States, … you’re working, your [illegal migrant] kids are going to school, you’re getting your health care, you’re part of the community. And obviously, a lot of these people don’t show up for their [asylum] court case. Some do, some don’t.

The proposed backlog amnesty is just one of many bureaucratic measures Mayorkas is taking to minimize the enforcement of the nation’s popular immigration laws, despite Congress’ refusal to loosen those laws.

For example, Mayorkas is extending the work-permit “DACA” amnesty for migrants who were brought into the country while children and is refusing to deport illegal migrants unless they commit felony crimes. He is also trying to give pro-migration, low-level officials the job of awarding asylum rights to migrants at the border — without supervision from immigration judges.

“The Biden Administration is willing to put its open-borders agenda and desire for a future legislative mass amnesty ahead of the safety and security of the American people,” said a statement from Gene Hamilton, the general counsel at America First Legal. This non-profit uses lawsuits to help enforce the nation’s popular immigration laws. The group noted:

This [agency amnesty] plan has been underway for some time, with advocates at DOJ–Margie O’Herron and Lucas Guttentag, both in the Office of the Deputy Attorney General, as well as EOIR personnel–coordinating efforts across the Administration through regular meetings with the Domestic Policy Council, on identifying ways to remove as many cases from the immigration court dockets as possible. But again, their plans appear to involve finding every way possible to avoid actually completing cases that might result in the issuance of a removal order against an alien.

These plans will now kick into high gear with the issuance of a 17-page memorandum from the Principal Legal Advisor of ICE, Kerry Doyle–a Biden Administration political appointee who formerly spent her entire career advocating for illegal aliens–directing ICE prosecutors to dismiss cases against illegal aliens, administratively close cases, acquiesce to requests from illegal aliens, and even goes so far as to encourage ICE attorneys to not appear in court in other cases.

“I think you’re starting to see a growing trend of the Biden administration recognizing that they’re a one-term proposition and they are just going to go for broke and just completely dismantle the system,” said Law. The goal, he said, is now to ensure “the interior enforcement structure will be so crippled that it will be impossible to rebuild it.”

The federal government tries to hide its economic policy of extracting workers and consumers from developing countries, Law said.

It’s always “Can you do just enough to deceive the public?” …  Any removals that are done by the administration are simply [driven by] bad optics, such as the Haitians congregating under the [Del Rio] bridge, when they just can’t get away from the bad publicity. [Then they] say, “Oh, we’re not totally open borders, we’re using our limited resources to get the worst actors.”

The government’s cooperation with the cartels is hidden behind theatrical enforcement of borders laws and a curtain of legal complexity, he said:

They are partners in this business transaction of importing people and workers into the United States. This is this is a mutually beneficial arrangement where the cartels are being enriched by all these people who are paying the money for the transport, and the Biden administration willingly welcomes them, helps process them, and places them wherever they want to be the inside of the country.

“This is 100 percent a very corrupt business arrangement between the cartels and the Biden ministration,” Law said.

Yet another mass release of single adult migrants from federal custody at this parking garage in Brownsville. Fourth bus today. First the women get off, then the men. We’ve seen zero children/minors released. BP sources tell me they’ve been releasing hundreds here daily. @FoxNews pic.twitter.com/xdCaNz7Pvz