The closer the collapse of an empire, the crazier their laws.  —Marcus Tullius Cicero

I have always been of the opinion that unpopularity earned by doing what is right is not unpopularity at all, but glory.  —Marcus Tullius Cicero

There is no denying that Hitler and Stalin are alive today… they are waiting for us to forget because this is what makes possible the resurrection of these two monsters.  —Simon Wiesenthal

A warrior knows he could die in battle, he just doesn’t expect the arrows to be from his own government. Today’s warriors are the doctors, scientists, pathologists, funeral directors, actuaries, conservative journalists, and radio hosts who are bringing us the truth. The floodgates are opened, but we the people must be behind those who are standing for the rest of us. If the enemies of freedom can eliminate them, we are next.

Today’s censorship is the greatest threat of all. Silence is not golden. The very right of free speech was so important to our founders that it was placed in our first amendment.

The Lord God Almighty gave us free will to choose whom we shall worship. Our country was founded on the words of our Declaration of Independence, “We hold these truths to be self-evident, that all men are created equal, that they are endowed by their Creator with certain unalienable Rights, that among these are Life, Liberty and the pursuit of Happiness.”

We are again facing what our founders faced with, “a long train of abuses and usurpations, pursuing invariably the same Object evinces a design to reduce them under absolute Despotism, it is their right, it is their duty, to throw off such Government, and to provide new Guards for their future security.”

When a nation turns its back on the Creator, He lifts His hand of blessing. Our Judeo-Christian heritage is all but obliterated from every facet of society. It is imperative that we turn back to Him.

We are at war, a Revolution to be exact, will we put on the full armor of God and, having done all, to Stand? Will we fight for life, liberty, and the pursuit of happiness, or will we kneel to the despots who claim that we are domestic terrorists?

The National School Boards Association (NSBA) sent a letter on September 29 to President Biden warning that school boards face “physical threats” due to opposition to COVID-19 policies and critical race theory. The letter claimed that some unruly parent protests may be “equivalent to a form of domestic terrorism.”  Upon investigation, not one “physical threat” case was unearthed. The NSBA issued a letter of apology, but it was too little, too late. Link

The federal government and intelligence branches now classify patriotic God-fearing Americans who love their country and our U.S. Constitution as being domestic terrorists. Our future does not bode well. One need only look at what our neighbors to the north are going through.

Trudeau just went full Nazi in Canada and declared the Emergencies Act – and is even sending in armed soldiers on horseback to beat and trample innocent protesters and is arresting any reporter who dares to report on his tyranny. Fifteen days (two lousy weeks) to slow the spread, and it turned into two full years. If you resist in Canada or protest, they will freeze your bank accounts, take your children and pets, tow your vehicles and toss you in prison. 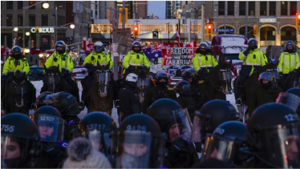 The U.S. intelligence community consists of 18 organizations, including intelligence elements of the five DoD services; the Army, Navy, Marine Corps, Air Force, and Space Force. The two agencies wielding the most political power in today’s environment are the Department of Homeland Security (DHS) and the Federal Bureau of Investigation (FBI).

The FBI has defined Domestic Terrorists but does not include Black Lives Matter, Antifa, Islamic “Extremists,” The New Black Panthers, or the Not F’g Around Coalition, to name just a few.

In an article entitled;  The War Comes Home: The Evolution of Domestic Terrorism in the United States, the Center for Strategic and International Studies (CSIS) states the following:

Some U.S. government agencies have outlined the threat from domestic extremists, though most have not provided recent data about terrorist incidents. In its Homeland Threat Assessment released in October 2020, the U.S. Department of Homeland Security concluded that “racially and ethnically motivated violent extremists—specifically white supremacist extremists (WSEs)—will remain the most persistent and lethal threat in the Homeland.”

Violence and the threat of violence are essential components of terrorism. This analysis divides terrorism into several categories: religious, ethnonationalism, violent-far-right, violent-far-left, and others (including terrorism that does not fit neatly into any of the other types).

There you have it. White Americans are the target!

How many times did America’s Pravda media call the 2020 riots and violence by BLM and Antifa “fiery protests, but mostly peaceful?” Mostly peaceful? Who the hell are they kidding? The destruction was massive. Police were told to stand down while stores were damaged and looted, businesses burned, and Portland, Oregon’s federal building, has $2.3 million in damages. These communist thugs damaged federal and private property throughout the country.

Indeed, they are on the FBI and DHS list of domestic terrorists, aren’t they?

The DHS put out a National Terrorism Advisory System Bulletin on February 7, 2022, stating that, “The United States remains in a heightened threat environment fueled by several factors, including an online environment filled with false or misleading narratives and conspiracy theories, and other forms of mis- dis- and mal-information (MDM) introduced and/or amplified by foreign and domestic threat actors. These threat actors seek to exacerbate societal friction to sow discord and undermine public trust in government institutions to encourage unrest, which could potentially inspire acts of violence.”

In the early 1900s, America was bereft of intelligence agencies other than the small staff of the Secret Service. One issue of the day was anarchism, an often-violent offshoot of Marxism, with its revolutionary call to overthrow capitalism and bring power to the common person. Anarchists took it a step further; they wanted to do away with government entirely.

The prevailing anarchistic creed that government was oppressive and repressive, that it should be overthrown by random attacks on the ruling class (including everyone from police to priests to politicians), was preached by often articulate spokesmen and women around the world. By the end of the nineteenth century, several world leaders were among those assassinated. Anarchists were the first modern-day terrorists.

After the assassination of President McKinley, Theodore Roosevelt became the President and named Charles Bonaparte as the Attorney General. With a need for criminal investigators, Bonaparte kept borrowing Secret Service (S.S.) men until Congress stopped it. He decided to start his investigatory agency and hired several of the S.S. he had borrowed. In 1909, Bonaparte’s successor, Attorney General George W. Wickersham, gave this band of agents their first name—the Bureau of Investigation. It stuck.

During its first 15 years, the Bureau was a shadow of its future self. It was not yet strong enough to withstand the sometimes-corrupting influence of patronage politics on hiring, promotions, and transfers. (Sounds as though it never changed) J. Edgar Hoover was appointed as Director of the Bureau of Investigation and was credited for founding the Federal Bureau of Investigation in 1935 and built it into the huge organization it is today. He amassed a great deal of power and was in a position to intimidate and threaten others, including multiple sitting presidents of the United States. Here is the list of directors who headed the FBI from its inception.

The U.S. Department of Homeland Security is a relatively new intelligence community member. It was founded in 2003 in response to the devastation of the September 11, 2001 attacks. Its stated missions involve anti-terrorism, border security, immigration and customs, cyber security, and disaster prevention and management. Like the FBI, the DHS is more about leftist politics than doing the job they were formed to do.

Our latest FBI Director, Christopher Wray, was suggested to President Donald Trump by Chris Christie. His nomination should have been pulled when he testified that he would not take orders from President Trump, but the 45th President let it slide. The FBI Director reports to the Attorney General, the number one legal advisor to the President. 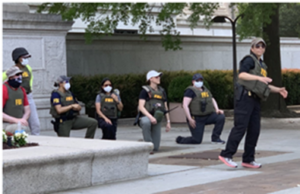 Few FBI Directors have had the public’s interest at heart, most, including Hoover, who spent his career amassing and expanding his power, a power he abused, were political animals. Hoover never trusted anyone he didn’t have something on. He was a monumental egotist with an insatiable demand for flattering publicity; he had little respect for American constitutional values. He was above all an aggrandizing bureaucrat, whose reach knew no bounds. He expanded his power and survived abuses that amounted to little less than blackmail of prominent public officials and private citizens and personal intimidation toward any person or institution daring to question his authority.

Eighty years ago, a brilliant female cryptologist found out precisely what Hoover and the FBI were all about.

A Trip Back in Time

In the 1930s, Elizebeth became America’s and the world’s most famous codebreaker. The evidence she gave in criminal trials describing how she cracked encrypted messages passing between mobsters made her a newspaper sensation. She even had to be protected by security guards.

Throughout World War II, Elizebeth used her skills to hunt Nazi spies who were spreading into the West. She broke these Nazi spy codes for the FBI, which would have been lost without her—and then Hoover turned around and painted himself as the big hero. There was nothing she could do because of secrecy rules.

While working for the intelligence department of the Coast Guard, Elisebeth discovered there were clandestine Nazi spies in Brazil sending codes. Hoover’s FBI attacked and captured this group, beat them mercilessly and exposed their code-breaking, and then thanked the South American police. His actions ruined the American and U.K. code-breaking efforts. After this happened, the Coast Guard and Navy purposely bypassed the publicity-seeking Hoover and gave nothing to the FBI. It took months for them to break the new codes again, and many Americans and allies’ lives were lost because of Hoover’s foolish self-aggrandizing bravado.

Elizebeth Smith Friedman’s wartime code-breaking work was so secret that she was forbidden to mention it publicly. She died many years before government archives were brought to light, showing what she had done. During and after World War II, Hoover and the FBI took the credit for work Elizebeth and her U.S. Coast Guard team had carried out. Those were the early years of Hoover’s nearly half-century reign as FBI Director.

I’ve mentioned only a few of the circumstances where the FBI failed to act, or their actions cost lives. Here is a list of many of their controversies.

Has the FBI had good men and women? Yes, they have! But most of those agents left or were forced out. John Guandolo and Robyn Gritz (Link) are just two of the wonderful agents who are no longer protecting America. There are far more.

We are facing the most treacherous time in American history, and it is apparent that U.S. intelligence communities will “just follow orders.”

Our Judeo-Christian society has long been the object of destruction. We must pray, fight and stand. “For we wrestle not against flesh and blood, but against principalities, against powers, against the rulers of the darkness of this world, against spiritual wickedness in high places.” Ephesians 6:12

Resistance to tyranny comes with many consequences, but then so does submission.