Yep. It appears during the campaign and even after the election, President Trump’s staff and it seems some of those in his Administration were electronically surveilled.

Let’s be perfectly clear: President Trump in his initial tweet claimed he had been “wiretapped.” That term is no longer used, but describes the only electronic surveillance available to intelligence folks back in the 60’s, 70’s, and 80’s. It involved actual tapping into telephone lines. When technology invented the latest way to quietly surveil electronic communications, (internet email and internet phone calls) the term “wiretap” was still used as a catch-all term that most understood.

Remember all the news anchors, reporters and government folks that rushed to any available microphone and/or camera to de-bunk the President’s wiretapping claims? There were many…and they were loud and ugly. Remember these?

This from CNN about Trump’s Wiretapping claims:

On a sleepy Saturday morning back in March, Donald Trump dropped this bombshell on the political world: “Terrible! Just found out that Obama had my ‘wires tapped’ in Trump Tower just before the victory. Nothing found. This is McCarthyism!” Turns out, he was lying. That’s the conclusion the Justice Department reached Friday night in a court filing; “Both FBI and NSD (National Security Division) confirm that they have no records related to wiretaps as described by the March 4, 2017 tweets,” the filing read.

This affirms what former FBI Director James Comey told Congress about Trump’s allegations in the Spring and what former Director of National Intelligence James Clapper has repeatedly said as well. Comey said this before Congress: “With respect to the president’s tweets about alleged wiretapping directed at him by the prior administration, I have no information that supports those tweets, and we have looked carefully inside the FBI,” he told the panel. 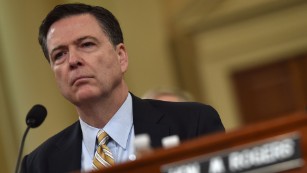 Trump, for his part, has offered zero evidence to back up his initial claim because, as we now know conclusively, there was no evidence. To sum it up: The current President of the United States flat-out lied about the then-sitting president issuing a wiretap of his campaign headquarters.

The New York Times on the Wiretapping Claims:After Mr Trump’s tweets earlier this month, the New York Times quoted unnamed senior officials reporting that Mr Comey had said the claim was false and had asked the justice department to publicly reject it. Mr Clapper said the intelligence agencies he had supervised did not wiretap Mr Trump last year, and nor did the FBI obtain a court order to monitor Mr. Trump’s phones.As intelligence director, he told NBC, he would have known about a “court order on something like this.”

(This is a reference to the US Foreign Intelligence Surveillance Court, which can grant wiretaps on the grounds of national security)

Then there Was Congress:Several senior Republicans have rejected the allegations after congressional committees looked into them. Senate Intelligence Committee chairman Richard Burr said on 16 March there were “no indications” that Trump Tower was the subject of surveillance by any element of the US government either before or after Election Day 2016. Earlier that day, House Speaker Paul Ryan also said “no such wiretap existed.” And the previous day, House of Representatives Intelligence Committee chairman Devin Nunes said: “We don’t have any evidence.” “I don’t think there was an actual tap of Trump Tower,” he told a news conference. “Are you going to take the tweets literally?” asked Rep Nunes. “If so, clearly the president was wrong.”

The Former President’s People about the Wiretapping Claims:

Mr Obama’s team says Mr Trump’s tweets are “simply false.” A warrant, if it existed, would most likely have been ordered by the Department of Justice independently of the White House. Former press secretary Josh Earnest told ABC: “This may come as a surprise to the current occupant of the Oval Office, but the president of the United States does not have the authority to unilaterally order the wiretapping of an American citizen. If the FBI decided to use their wiretapping authority in the context of the counterintelligence or criminal investigation, it would require FBI investigators, officials at the Department of Justice going to a federal judge and making a case, and demonstrating probable cause to use that authority to conduct the investigation. That is a fact.”

The only way Mr Obama could have ordered surveillance without going through the Foreign Intelligence Surveillance Court (Fisa court) is if there were no U.S. citizens involved. In this case, considering the target is allegedly Trump Tower – which definitely involves American citizens – this would have been hard to argue.

Washington (CNN)U.S. investigators wiretapped former Trump campaign chairman Paul Manafort under secret court orders before and after the election, sources tell CNN, an extraordinary step involving a high-ranking campaign official now at the center of the Russia meddling probe. The government snooping continued into early this year, including a period when Manafort was known to talk to President Donald Trump. Special counsel Robert Mueller’s team, which is leading the investigation into Russia’s involvement in the election, has been provided details of these communications.

There you have it: Trump campaign operatives WERE surveilled. And because Paul Manafort at that time lived in an apartment inside Trump Tower, odds are that MANY Trump people were recorded speaking to Manafort — PROBABLY EVEN THE PRESIDENT! Remember, Manafort during part of this time was the Director of the Trump Campaign.

The most glaring note here is that the Liberal Media went haywire reporting the initial Trump tweet. They laughed at him, called him a liar, accused him of creating through the lie of wiretapping a diversion to take the news away from his campaign’s Russia collusion during the election. That’s irony number one.

Irony number two is that members of Congress also weighed in — both Republicans and Democrats — stating factually and emphatically that there was no wiretapping/surveillance of Donald Trump by anyone in the previous Administration.

Irony number four is that heads of the Big Four Intelligence agencies all agreed there was no evidence of any surveillance/wiretapping of anyone in the Trump Campaign, including the very public James Clapper and James Comey. If anyone had done anything so surreptitious as sneak a listen to the Trump folks, Clapper and Comey would have not only known about it, they would have been involved in it, or so they testified.

But the greatest irony of all is this: the U.S. Intelligence community has been exposed. Think about it: those agency heads are either complicit in the illegal surveillance of the President, or lying to Congress and the American people about it.  I don’t know which of those scares me the most. At best the U.S. Intelligence has been run by the worst kind of liars — the ones that do so in cahoots with others and did it all for political purposes in total disregard for U.S. security. At worst, Intelligence agencies are run by unqualified persons or are full of rogue agents who behind the scenes operate with separate agendas from the stated purposes of their agencies.

However much disdain I have for the Media, I understand their purposes for attacking President Trump. In doing so because they are out front with their “news” in print, television and radio, we know their bias. Regarding those in Congress coming out “factually” claiming Trump’s error in claiming the surveillance, they all have political purposes for everything they say and do. I’m certain their claims were based on at least one of those. But the Intelligence Community being full of people who would break the law and then lie about it again and again to Congress and to Americans with impunity — I cannot accept that.

CNN, Jim Comey, James Clapper, MSNBC, New York Times, Paul Ryan, Richard Burr, Devin Nunes: Americans are all waiting for you to get front and center and say (or print): “I WAS WRONG!”