We are far from the Democratic love of federalism that presented itself over the past four years. After all, former President Donald Trump is now gone. When a Republican is in the White House, Democrats cheer on their governors as they buck the Administration. Now that a Democrat is president, states that don’t buy into the Democratic agenda must be bludgeoned into submission.

Biden, who thinks that the vaccine is so ineffective that we must protect vaccinated people from the unvaccinated, wants to dictate COVID-19 policies from on high in Washington. He and the Democratic Party only view federalism as a helpful tool to resist Republican presidents. When a Democrat calls the shots, Republican governors aren’t afforded the same process.

Biden is doing this for many reasons, including to shift the focus off the disaster he set into motion in Afghanistan and his failed promise to “shut down the virus.” But he is doing this primarily because this is what Democrats want to do when they control the presidency.

Biden has already sicced his Justice Department on the state of Georgia over its benign voting reform law because it doesn’t match what Democrats want. He’s doing the same with Texas’s abortion law, and you will recall that Vice President Kamala Harris wants to require all laws that would restrict abortion to be reviewed (and then struck down) by the Justice Department. You will also remember that when Harris was running for president, she promised to impose gun control without the input of Congress.

Except for a few members, Democrats in Washington have no consistent view of how the government should work beyond “might makes right.” There are only a handful of Democratic senators keeping the legislative filibuster in place, which was never a worry when Republicans ran the chamber from 2015 until earlier this year. Elected Democrats are increasingly in favor of “reforming” the Supreme Court so that it only returns rulings that they want to see.

Biden’s repeated power grabs and attempts to stretch the power of the presidency over the Supreme Court and states are not just because he is an authoritarian. It’s because authoritarianism is the guiding light of the Democratic Party, at least only when Democrats control the necessary levers of power.

Biden warned the leaders of seven major U.S. oil producers and refiners — ExxonMobil, Chevron, B.P. America, Shell USA, Phillips 66, Marathon, and Valero — that he was “prepared to use all reasonable and appropriate Federal Government tools and emergency authorities” to increase petroleum refinery capacity and output, according to the letter obtained by Axios. The average price of gasoline nationwide hit a record $5.02 per gallon Tuesday. In contrast, the average cost of diesel fuel hit an all-time high of $5.78 a gallon Wednesday, according to AAA data.

“I understand that many factors contributed to the business decisions to reduce refinery capacity, which occurred before I took office,” Biden wrote in the letters. “But at a time of war, refinery profit margins well above normal being passed directly onto American families are unacceptable.”

“With prices for your product where they are today, you have ample market incentive to take these actions, and I recognize that some of you have already begun to do so,” he continued.

However, U.S. refining capacity utilization surged to 91.3% in March, its highest rate since June 2021, and is expected to average 94% between July-September, according to a June 7 report from the Energy Information Administration (EIA). Refining utilization measures how much fuel refiners produce from crude oil inputs relative to their total production capacity. 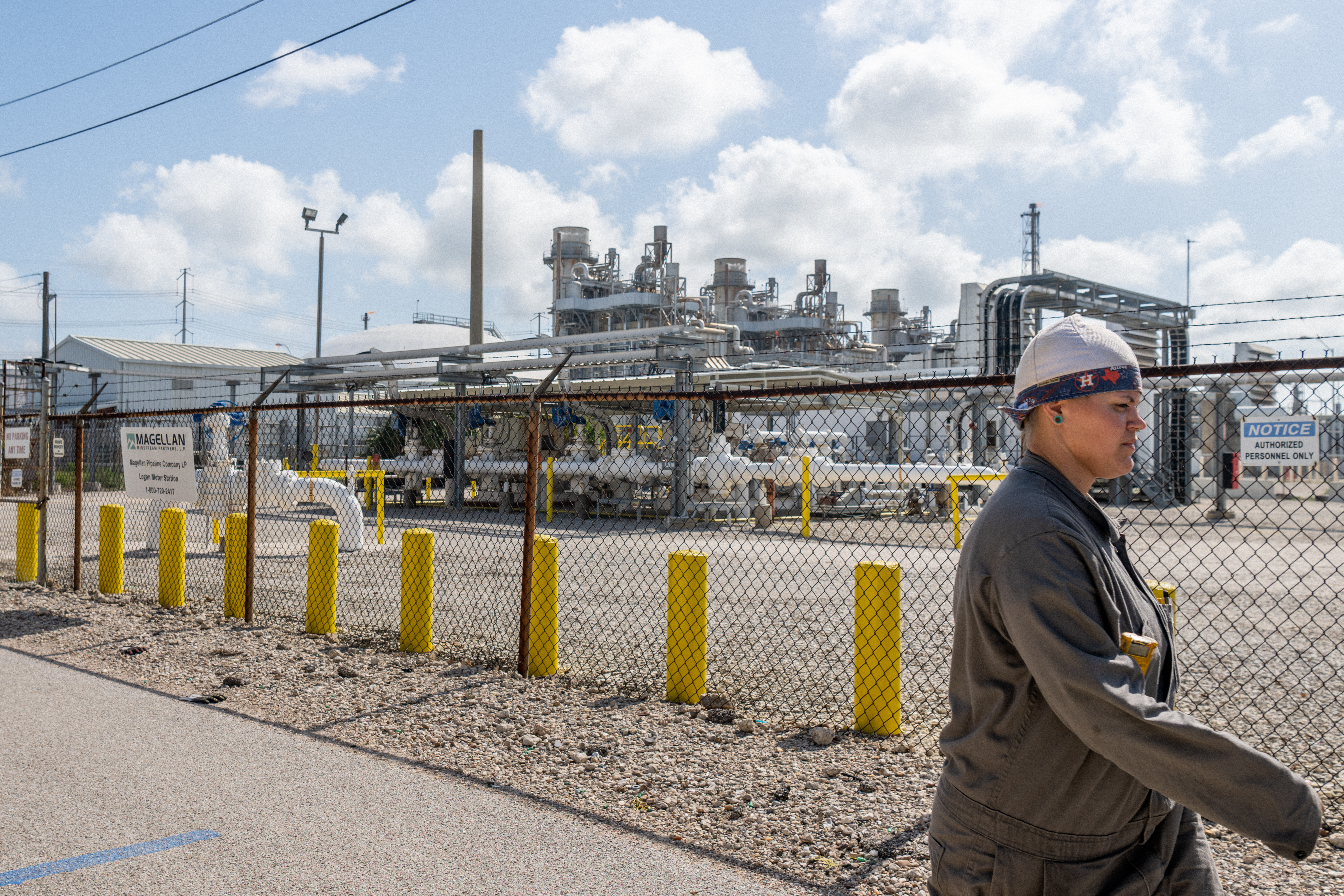 ExxonMobil said it has been in regular contact with the White House to update it on its continued investments in domestic oil and gas supplies in a statement shared with TheDCNF. The Texas-based company added that the federal government should promote investment through a “clear and consistent policy” such as streamlining the regulatory approval process for fossil fuel infrastructure and holding regular oil and gas lease sales.

“We’ve been investing through the downturn to increase refining capacity to process U.S. light crude by about 250,000 barrels per day – the equivalent of adding a new medium-sized refinery,” the statement continued. “We kept investing even during the pandemic when we lost more than $20 billion and had to borrow more than $30 billion to maintain investment to increase capacity to be ready for post-pandemic demand.”

The last major refinery to be constructed in the U.S. was Marathon Oil’s facility built in Louisiana in 1977. Industry groups and experts blamed the declining capacity and lack of new refineries on environmental regulation and projected fuel demand decline in the future as governments push green energy alternatives.

“We are surprised and disappointed by the President’s letter,” American Fuel & Petrochemical Manufacturers (AFPM) President and CEO Chet Thompson said in a statement to TheDCNF. “Our team at AFPM has been working closely with the Administration—as recently as this week—providing industry insights and policy recommendations to address the global energy challenge. Any suggestion that U.S. refiners are not doing our part to bring stability to the market is false.”

“We would encourage the Administration to look inward to understand better the role their policies and hostile rhetoric have played in the current environment,” he continued.

Mike Sommers, the CEO of the American Petroleum Institute, said that his group appreciated the opportunity for dialogue with the White House but that the “administration’s misguided policy agenda shifting away from domestic oil and natural gas has compounded inflationary pressures and added headwinds to companies’ daily efforts to meet growing energy” in a statement.

Biden added in his letters that Energy Secretary Jennifer Granholm would host an emergency meeting on domestic refining capacity.

The U.S. stockpile of diesel fuel, vital for the transportation sector and economy at large, hit a nearly two-decade low as fuel prices hit a record high Wednesday.

The nationwide stockpile of distillate fuel oil — a category including diesel and fuel oil — declined to about 104 million barrels, the lowest level since May 2005, the Energy Information Administration (EIA) reported Wednesday. East Coast inventories fell to 21.3 million barrels of diesel fuel or about two weeks’ worth of supply, the lowest level since data was first recorded in 1990.

“I wouldn’t be surprised to see diesel being rationed on the East Coast this summer,” John Catsimatidis, the CEO of United Refining Co., told Bloomberg on Wednesday. “Current inventories are low, and we may see a shortage in coming months.”

Meanwhile, the average cost of diesel fuel in the U.S. surpassed $5.56 a gallon Thursday, the highest level ever recorded, AAA data showed.

Diesel, characterized as the “lifeblood of the global economy,” is vital for the construction, mining, and agriculture sectors. The transportation industry alone consumed 122 million gallons of diesel daily in 2020.

“What we’ve seen this year has been the capabilities to turn oil into diesel and gasoline, and jet fuel has diminished,” Jacques Rousseau, a managing director at Clearview Energy Partners, told The Daily Caller News Foundation in an interview.

Rousseau added that diesel fuel inventory levels and production have plummeted due to a decrease in refinery capacity nationwide. He said several refineries, which process crude oil and turn it into diesel, have closed in recent years primarily due to the COVID-19 pandemic-induced recession in 2020.

Meanwhile, bans on Russian fuels in the U.S. and Europe amid the Ukraine crisis have put even more pressure on the American energy industry, which has sought to fill the gaps in the global supply chain. Although the U.S. is a net exporter of distillate fuel oil, it imported 77,000 barrels of the product from Russia in February.

“A lot of countries won’t accept Russian fuels anymore. So, which has caused a need for more diesel worldwide, and the U.S. is a major exporter of refined products. So U.S. diesel exports are up,” Rousseau told TheDCNF. “So, you have fewer capabilities, you got more exports, and what that’s doing is drawing down the inventory levels in the U.S.”

He added that high fuel prices and the decline of diesel inventory levels have already led to higher consumer costs.

The two largest American transportation and freight companies — UPS and Union Pacific — have upped their fuel surcharges to account for the market instability. Union Pacific, which transports freight via rail, hiked its surcharge to a whopping 39% this month.

In addition, the U.S. food sector has also been impacted by the higher fuel prices. Higher diesel prices are “certainly going to translate into more expensive goods,” Patrick De Haan, an analyst at the research firm GasBuddy, told CNBC.

Tyson Foods, one of the largest U.S. food producers, noted that” inflationary pressures across the supply chain” have led to higher monthly costs in its earnings report. Food prices increased 9.4% between May 2021 and April, the largest jump since 1981, according to the Department of Labor.

Who will ever forget the hypocrisy of Democrat politicians, their Legacy Media lapdogs, and even President Joe Biden, entrenched in their constant allegations against former President Donald Trump for being an “autocrat?” Sometimes I wonder if these same people actually know the definition of an autocrat. Just in case YOU forgot, here’s the definition from Websters:

“1. A person (such as a monarch) ruling with unlimited authority;  2. One who has undisputed influence or power.”

Does that in any stretch of the reality of Donald Trump’s four years as POTUS describe Donald Trump in ANY actions he initiated or attempted?

Let’s put the shoe on the other foot: President Joe Biden. Joe Biden IS playing the role he blamed Trump for that Trump NEVER attempted to ascend to!

Of course, we’re biased. So let’s turn to MSN and see what the far-left newsgroup had to say about the autocratic actions of each of these presidents:

“People should not wait,” said White House deputy press secretary Karine Jean-Pierre. “They should continue to move forward and make sure they’re getting their workplace vaccinated.”When President Joe Biden tells businesses in the country to ignore the courts, the media have little to say. After all, there is a Democrat in the White House.

“After all, there is a Democrat in the White House,” explains it all. From top to bottom, in government and in mainstream media, the call to denigrate ANY Republican who dares stand against any wrongdoing — even illegal wrongdoing —  is quickly and dramatically pounced upon by all these leftists. When a Democrat in power decides to embark on illegalities, these same people don’t just defend their fellow Dem, they applaud that person’s “bold and powerful stand against the tyranny of those evil Republicans!”

Clearly, Joe Biden is serving his term as President as an authoritarian hellbent on having his way — regardless of the cost or consequences AND in total disregard for the Constitution, duly passed federal laws and even Supreme Court precedence.

Before you are tempted to throw your Diet Pepsi at your computer screen in disgust, ask and answer this question: On what basis can ANY President or any elected member of Congress arbitrarily thumb his/her nose at the laws passed by Congress regarding ANY issue? And what Constitutional provision is acceptable to ignore?

There is NO plausible explanation for Biden or any other federal employee that justifies doing so. There is ONE that makes sense, though. It’s because our Commander in Chief has adopted the role of “United States Authoritarian Commander in Chief.”

If you can think of any other logical explanation (that is included in the U.S. Constitution), let us know.