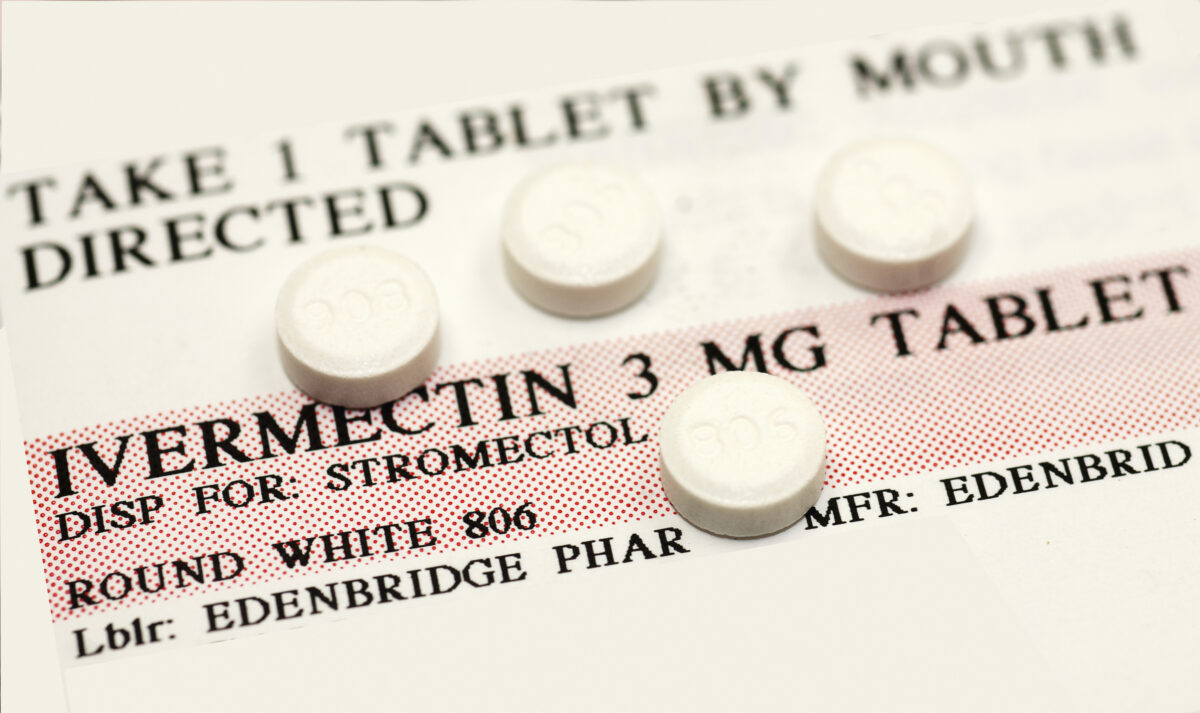 Tested on the Omicron variant, ivermectin outperformed 10 medications, including one approved for emergency use. Early treatment can lower hospitalization, mortality, and symptoms of long COVID.

At nearly no other time in history has there been this level of fear generated across the world as experienced thus far in 2020 and 2021. The depth and breadth of the strategies used to stoke those fears have been overwhelming.

Emergency use authorizations for drugs that have not proven to be effective in trials, public mask mandates for which there is no scientific evidence, and the suppression and censorship of health information have boosted public fear over a viral illness with a survival rate of over 99%.

Unfortunately, many of the early effective treatment strategies that can be used at home have also fallen victim to censorship. Ivermectin is one of those strategies. In a computational analysis of the Omicron variant against several therapeutic agents, data show that ivermectin had the best results.

Yet, as you look objectively at what’s been happening across the world, the fear being generated is not one-sided. The suppression of information by corporations, government agencies, and the pharmaceutical industry is one indication of their concern and how far they’re willing to go to ensure the level of fear remains high enough to manipulate behavior.

This is 20 times greater than the death rate from COVID-19. Yet these same agencies were not lobbying for mandates against soda or sugar-laden foods; they weren’t banning smoking and they weren’t mandating exercise — all heart disease risk factors.

The censorship and suppression of information have hobbled the early treatment of COVID-19 in many western nations. Through 2020, public health experts and the mainstream media warned against the use of hydroxychloroquine and ivermectin. Both are on the World Health Organization’s list of essential drugs, but the benefits have been ignored by public health officials and buried by the media.

This study on Cornell University’s preprint website has not yet been peer-reviewed. Researchers used computational analysis to look at the Omicron variant, which has demonstrated a lower clinical presentation and lower hospital admission rates.

After having retrieved the complete genome sequence and collecting 30 variants from the database, the researchers analyzed 10 drugs against the virus, including:

The researchers found that each of the drugs had some degree of effectiveness against the virus and most were currently in clinical trials. They used molecular docking to find that the mutations in the Omicron variant didn’t significantly affect the interaction between the drugs and the main protease.

An analysis of all 10 drugs found that ivermectin was the most effective drug candidate against the Omicron variant. The testing included Nirmatrelvir (Paxlovid), which is the new protease inhibitor for which the FDA provided an emergency use authorization against COVID in December 2021.

In other words, Pfizer released a new drug which cost the U.S. taxpayers $5.29 billion or $529 per course of treatment and which received a EUA despite the availability of a similar drug that has proven to be more effective and is cheaper, priced between $48 and $95 for 20 pills depending on your location.

Ivermectin is best known for its antiparasitic properties. Yet, the drug also has antiviral and anti-inflammatory properties. Studies have shown that ivermectin helps to lower the viral load by inhibiting replication. A single dose of ivermectin can kill 99.8% of the virus within 48 hours.

A meta-analysis in the American Journal of Therapeutics showed the drug reduced infection by an average of 86% when used preventively. An observational study in Bangladesh evaluated the effectiveness of ivermectin as prophylaxis for COVID-19 in health care workers.

The data showed four of the 58 volunteers who took 12 mg of ivermectin once a month for four months developed mild COVID symptoms as compared to 44 of the 60 health care workers who declined the medication.

Ivermectin has also been shown to speed recovery, in part by inhibiting inflammation and protecting against organ damage.27 This pathway also lowers the risk of hospitalization and death. Meta-analyses have shown an average reduction in mortality that ranges from 75%28 to 83%.29 30

Additionally, the drug also prevents transmission of SARS-CoV-2 when taken before or after exposure.31 Added together, these benefits make it clear that ivermectin could all but eliminate this pandemic.

Some people who have had COVID-19 seem to be unable to fully recover and complain of lingering symptoms of chronic fatigue. Others struggle with mental health problems. One study, in November 2020, found 18.1% of people who had COVID-19 received their first psychiatric diagnosis in the 14 to 90 days after recovery. The most commonly diagnosed conditions were anxiety disorders, insomnia, and dementia.

These symptoms have come to be called long COVID, long-haul COVID, post-COVID syndrome, chronic COVID or long-haul syndrome. They all refer to symptoms that persist for four more weeks after the initial COVID-19 infection. According to Dr. Peter McCullough, board-certified internist and cardiologist, 50% of those who have been sick enough to be hospitalized will have symptoms of long COVID:

Some of the common symptoms of long COVID include shortness of breath, joint pain, memory, concentration or sleeping problems, muscle pain or headache, and loss of smell or taste. According to McCullough, a paper presented by Dr. Bruce Patterson at the International COVID Summit in Rome, September 11 to 14, 2021:

“… showed that in individuals who’ve had significant COVID illness, 15 months later the s1 segment of the spike protein is recoverable from human monocytes. That means the body literally has been sprayed with the virus and it spends 15 months, in a sense, trying to clean out the spike protein from our tissues. No wonder people have long COVID syndrome.”

It should come as no surprise that studies have also confirmed that early intervention improves mortality and reduces hospitalizations. Perhaps one of the greatest crimes in this whole pandemic is the refusal by reigning health authorities to issue early treatment guidance.

Instead, they’ve done everything possible to suppress remedies shown to work. Patients were simply told to stay home and do nothing. Once the infection had worsened to the point of near-death, patients were told to go to the hospital, where most were routinely placed on mechanical ventilation — a practice that was quickly discovered to be lethal.

However, as the featured study and others have demonstrated, ivermectin is one of the successful treatment protocols that can be used against SARS-CoV-2.

Africa Has Lowest Case and Death Rate, Likely From Ivermectin

Across the world, countries have taken different approaches to address the spread of the virus. The steps taken in Africa varied depending on the country, yet the infection and death rates were relatively stable and low across the continent.

In the last year, there have been reports of small areas in the world where the number of infections, deaths or case-fatality rates have been significantly lower than the rest of the world. For example, India’s Uttar Pradesh State reported a recovery rate of 98.6% and no further infections.

However, the entire continent of Africa appears to have sidestepped the massive number of infections and deaths predicted for these poorly funded countries with overcrowded cities. Early estimations were that millions would die, but that scenario has not materialized. The World Health Organization has called Africa “one of the least affected regions in the world.”

There are several factors that may influence the infection rate in Africa. A study from Japan demonstrates that after just 12 days that doctors were allowed to legally prescribe Ivermectin to their patients, the cases dropped dramatically.

The chairman of the Tokyo Medical Association had noticed the low number of infections and deaths in Africa, where many use ivermectin prophylactically and as the core strategy to treat onchocerciasis, a parasitic disease also known as river blindness. More than 99% of people infected with river blindness live in 31 African countries.

Finally, Artemisia annua, also known as sweet wormwood, is an herb used in combination therapies to treat malaria. It was used in traditional Chinese medicine for more than 2,000 years to treat fever. Today artemisinin, a metabolite of Artemisia, is the current therapeutic option for malaria. The plant has also been studied since the 2003 SARS outbreak for the treatment of coronaviruses, with good results.

In other words, whether by design or default, the medications that have proven to be successful against the virus are commonly used in Africa for other health conditions. While Pfizer tests the short- and long-term effects of a genetic experiment on Israel’s population, it appears one continent has demonstrated administration of a 30-year-old, inexpensive drug with a known safety profile could reduce the cases, severity, and mortality from this infection.

The question that must be asked and answered to get to the bottom of this pandemic is what is blinding mainstream media, government agencies, public health experts, medical associations, doctors, nurses, and your next-door neighbor from recognizing and speaking out in support of science?

Centers for Disease Control and Prevention, Know Your Risks for Heart Disease

Royal College of Physicians, May 2020

Dr. Joseph Mercola is the founder of Mercola.com. An osteopathic physician, best-selling author, and recipient of multiple awards in the field of natural health, his primary vision is to change the modern health paradigm by providing people with a valuable resource to help them take control of their health